Pre-production on a documentary is when you develop your knowledge on the subject of your film. You assume nothing, and research everything. A documentary filmmaker should do their own research so that they can become experts on the subject: they have to know their topic inside out. The best films reveal information that is surprising; it could be new facts or a revealing perspective on an established argument. So here are four simple rules when researching: 1) don’t be afraid to ask simple questions; 2) don’t pretend to know all the answers; 3) don’t assume what you think you know already is correct; 4) approach everything you learn with an open mind.

Your expertise lies in the ability to tell complex stories in a clear, engaging way; so rely on the expertise of others for the information itself. Do online and print research from trusted sources, of course; but also speak to people either in person or on the phone, because you have to confirm accuracy and authenticity. The best research combines these different, vital sources of information. Facts underpin your documentary so they have to be checked and verified, whilst statistics have to be put into context to be properly understood. Triangulate your research by referring to more than one source when checking facts to confirm accuracy.

Keep organised notes, which is essential when researching.

Here are some tips:

Your research will help you to focus the core idea of your film. If you can’t pitch that idea concisely – the classic ‘elevator pitch’ – then you’re probably not ready to start filming. You need to know 1) that you have a good story, and 2) one that will interest others. A good pitch compels your audience to find out more about your film and pulls them into your story.

This fleshes out the core idea into the narrative spine of your film. It’s a chance to anticipate how the storyline could take shape, sequences that could be filmed and how they could stitch together into a documentary. Your act structure will also take shape. This outline will create, on paper, how you think the film will look overall. Where the film begins is not the same thing as the start of the chronology of events. Your outline starts where you believe the story of your film begins: the point of attack (see last post). The outline will include the film’s key moments, and it will introduce the characters and scenes that you believe are important to the telling of the story.

An outline is a planning tool. It maps out the role a scene will play within the overall structure of the narrative, as well as the storytelling roles of your characters (how they will be used within the film). It will also highlight areas that need to be addressed: redundant characters who add little to the narrative, or gaps in the detail of the storytelling. These should become evident as the film expands on paper.

The outline is more detailed than the pitch: it will include sequences. A sequence works like a chapter in a book. On average, it lasts between 3-6 minutes and can include sub-sequences because you may introduce backstory. Each should add something unique and new, and feel complete; then push you towards the next sequence. You can transition into a new sequence in different ways: a change of rhythm through the use of music, or upsound actuality perhaps. One tip here: you could give each sequence a title in your outline to signify its role within the overall story. Visualise the sequence in your head. What do you see happening? What will this reveal about a character? Which questions are being answered within the structure of your film? Why are they being addressed here within the narrative, and not sooner or later?

When you eventually start to edit your film and you assemble the sync and actuality content, this outline will prove useful. You will continue to update and fine-tune the outline throughout the production process until you finally sit down in the editing suite. The initial outline will anticipate what happens: the names of the people you will want to interview and what you will want them to discuss – those ‘must have’ interviewees. The outline will also tell you how the film is building, and if you have enough variety in sequences and content.

All the people who appear in your film need to be researched and contacted. You need good access to people for your film to work. Decisions about who will be approached and what they are expected to bring to the storytelling process are important. Do you have evidence already of how your main characters appear on camera: are they good talkers, relaxed and engaging? Do they have a certain type of charisma on screen? You should be thinking about the casting of interviewees and main characters early, because they will probably drive the narrative structure. Does your film need experts to offer a range of viewpoints and offer balance? Each person should have a job to do within the film and think carefully about what that is; the more indepth the planning at the start, the better the final result in the edit.

You want real people to give you access to their lives, and in particular to situations that embody the themes being discussed within the film. Think micro and macro here. A small story about the interviewee may offer a valuable, personal insight into a much bigger issue affecting society as a whole. The audience understands the bigger issue better through a personal story with which they can empathise. The right interviewee can add credibility to your film, so be ethically responsible about how you approach them. Be honest about how you wish to include their contribution (Informed Consent).

This is not a straight question about equal time on air for opposing points of view. Two opposing points of view talking past each other achieves nothing. If one side of the argument has a large body of evidence and expert opinion supporting it, giving that equal time with the opposing point of view is not an accurate reflection of the situation. If anything, you are giving a false impression to the audience about the reality of the issue. Instead, you should seek out different perspectives on the same thing, offering a more complex understanding to the audience. Casting is important here, as you want the appropriate people on board to express the most significant points to advance the argument. You want interviewees who can talk about a subject with genuine interest. For example, when talking about an event that has happened, you want an interviewee to say ‘I’ because they are giving a first-hand testimonial; not ‘he’ or ‘she’, which means they are describing what happened to someone else. You want, wherever possible, to place the viewer in the middle of the action unfolding within the film, and that includes the reporting of past events.

The outline is expanded into a treatment as pre-production approaches full production. The treatment is the story of your film in words, playing out on paper just as you expect to see it on screen. It is usually approx. 5-10 pages, and demonstrates that the filmmaker has a clear sense of the full story and how it will be realised. It should be presented professionally, with appropriate time and care assigned to how it is written.

In a treatment, you tell the story, mirroring the structure of the film, and starting at the same location as where the film will actually begin. If your film is focused around a number of dramatic moments or twists, then so should your treatment. If you are making a 3-act film, with a dramatic moment at the end of Act 2, then you should be revealing this moment about ¾ of the way through the treatment. People, places, events and main sequences should be introduced in the same order as they are expected within the film.

Points to note when writing a treatment:

The best treatments capture a great story that is well researched. They also reveal an unusual perspective, a new angle or great access to people and places.

Next stage in the production process is turning the pre-production treatment into a shooting treatment. That’s the topic of the next post in this series. 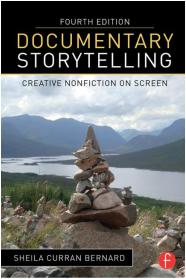